Everything you need to note about bilateral PCOS 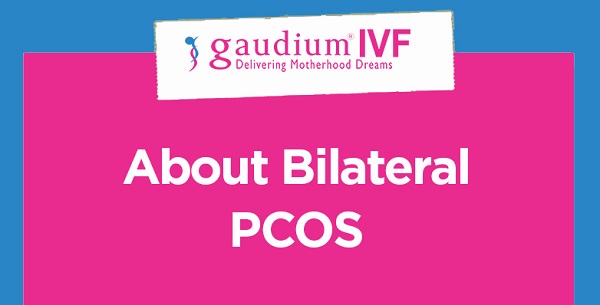 PCOS stands for Polycystic Ovary Syndrome, and it is a kind of hormonal disorder that is commonly seen in women who have reached the reproductive age. Women who suffer from bilateral PCOS have long or infrequent menstrual periods. They develop a number of fluid follicles in the ovaries, and it disrupts the regular release of eggs. Though the exact cause of these diseases is not known, early detection and treatment coupled with weight loss can help to reduce the risk of future complications.

Symptoms of the disorder

The bilateral PCOS symptoms vary from one person to another. However, it is safe to say that you need to see a doctor if you notice any of the following signs.

Excessive levels of androgen: Increased levels of male hormone might manifest itself in the form of signs like severe acne, excessive body, and facial hair, and thinning of hair.

Irregularity in menstrual period: Prolonged, irregular, or infrequent menstrual cycles are the surest signs of PCOD. See a doctor if you have unusually heavy periods, more than thirty-five days’ gap between periods, and less than nine periods a year.

Complications that can arise

PCOD is not something that you should leave untreated because it can lead to the following complications.

Tests to detect the disorder

The doctors usually ask patients to go for an ultrasound to detect PCO. The report tells your doctor about the thickness of your uterus lining and the appearance of the ovaries. Additionally, there’s a pelvic exam carried out whereby the doctor manually and visually examines the reproductive organs for growths, masses, and other such abnormalities. Blood tests are also a part of the bilateral PCOS test, and these are ordered by your doctor in order to measure your hormone levels.

Treatments for the disorder

The treatment for PCOD is usually done in either of the three ways: through birth control pills, other medications, or surgery.

Other kinds of medication like Metformin, Clomiphene, and Eflornithine are also administered to the patients in order to restore the menstrual cycle to a normal one.

If other forms of bilateral PCOS treatment do not work, doctors suggest surgery for improving fertility rates. The process is called ovarian drilling, and in this process, small holes are made in the ovary using a thin needle or laser for restoring normal ovulation.

PCOD is a highly common disorder. There’s nothing to worry about it if you undergo regular checkups and follow the instructions given by your doctor. With proper treatment, your menstrual cycles will come back to normal.