What are fibroids and how do they impact fertility? 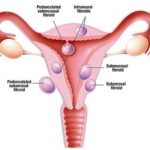 Fibroids in the uterus are non-cancerous growths of muscle tissue that generally grow on the lining of the uterus. Medically known as leiomyoma or myoma,fibroid growths can vary in number and size – from a single relatively large growth to multiple growths. Fibroids are more common than one would think and 70-80% of women get fibroids by the time they reach middle age.

The exact cause of uterine fibroids still remains a mystery. Studies have shown that the growth of fibroids is linked to the estrogen hormone. This is obvious because generally fibroids do not develop during the period from puberty to middle age during which time estrogen levels in women are generally high. Fibroids tend to shrink or disappear after menopause as that is when estrogen levels begin to fall.

Although there is no definite cause for fibroids studies have found that women who have had children are less likely to develop fibroids. In some cases it is found that women who reach puberty very early may develop fibroids. It has also been observed that the use of birth control pills is likely to avert growth of fibroids. Of course genetic history plays a vital role in a lot of this.

Symptoms, effects and types of fibroids

Symptoms and effects vary depending on the type of fibroid, although in many cases fibroids may have no effect or symptoms. When symptoms do appear they may include:

Fibroids are of different types and are generally classified on the basis of where in the uterus they are growing.

How do fibroids affect fertility?

Out of all the different type of fibroids, submucosal fibroids ­- which grow under the interior surface of the uterus and also protrude into the uterus ­­­- are found to be the most detrimental to fertility. Because of where and how thee fibroids are located, they tend to distort the shape of the uterus and thus interfere with embryo implantation.
Many women discover they have fibroids when they have trouble conceiving and approach their gynecologist with the problem. Your gynecologist will order investigations to first determine what kind of fibroid you have and clarify whether the fibroid is coming in the way of a successful conception. Depending on the diagnosis, they may refer you to an infertility specialist.

If a woman is suffering from submucosal fibroids, she will most likely require surgery for removal of fibroids. This is because fibroids that change the shape of the uterine cavity and decrease fertility by about 70% and removal of these fibroids increases fertility drastically. Intramural fibroids – fibroids that lie within the uterine wall and do not affect the shape of the uterine cavity – or cervical and subserosal fibroids do not affect fertility as such but may lead to complications during pregnancy. It is best to have your doctor monitor such fibroids and administer the appropriate treatment in such cases.

If you have been diagnosed with fibroids and have been unable to conceive, feel free to consult award-winning Infertility Specialist Dr. Manika Khanna who has successfully treated hundreds of patients with fibroid-related infertility.