Understanding Pregnancy Implantation Bleeding: All that IVF clinics in Delhi have to say 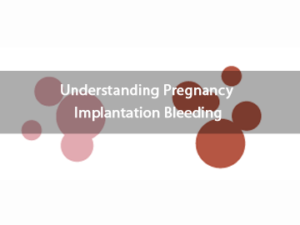 The period between conception and confirmation of pregnancy is critical, particularly if the woman has been struggling with female infertility. Whether conception is natural or assisted with IVF treatment in Delhi, it takes two weeks to be confirmed. This 2 ww or 2 week wait period has the woman hanging between hope and despair. Every single twitch or change excites her as she manifests it as a symptom of an upcoming pregnancy.

Implantation bleeding is the light bleeding that a woman experiences when a fertilized egg implants itself to the uterine wall. This is a common occurrence, with one in every three pregnant women coming across it. It changes the notion that vaginal bleeding during pregnancy is always dangerous. In fact, implantation bleeding is great news that indicates an impending pregnancy on the way.

The process of implantation is a miracle of nature. During natural conception, a mature egg meets a sperm and gets fertilized forming an embryo. The embryo travels down the fallopian tube and reaches the uterine cavity. Similarly, women going through IVF treatment in Delhi have an embryo transfer done. A mature embryo is transferred into the uterus vaginally, with the help of a catheter in an IVF treatment cycle. Whichever is the case, the embryo needs to implant itself in the thickened endometrium or uterine wall for pregnancy to take place. As the embryo lodges itself into the endometrium, it disrupts the blood vessels and causes light bleeding.

How do differentiate between implantation bleeding and menstrual period?

A woman planning conception is likely to be concerned when she experiences vaginal bleeding at the time her period is due. Knowing the difference between implantation bleeding and menstrual period can make all the difference for her. Here are the signals that IVF clinics in Delhi suggest women to look out for:

Color: The color of the discharge can be the primary indication of the type of bleeding. Those who have conceived with IVF treatment in Delhi have to be extra watchful about the color of the bleeding. Implantation bleeding varies from pink to brown in color and is easy to differentiate from the bright red bleeding of the menstrual period. Every female can make out the difference easily as this will not be similar to the color of bleed she gets in her normal period.

Consistency: Another parameter that IVF clinics in Delhi lay down to distinguish between the two is the consistency of bleeding. While a typical menstrual cycle is a heavy inflow, implantation bleeding is more like spotting that comes on and off. It is not predictable as a woman’s normal menstrual period.

Length: A female menstruates for a period of four to seven days on average. Typically, it begins with light bleeding, then gets heavier, and again wanes before stopping entirely. On the other hand, implantation bleeding lasts shorter with the flow varying from spotty to constant.  It can extend from a few hours to a few days, differing from case to case. Implantation bleeding during the first pregnancy lasts longer and is heavier as compared to subsequent ones.

Timing: The timing of the bleeding is yet another way to identify its reason. A typical menstrual cycle lasts between 28 and 35 days. Implantation bleeding, on the other hand, starts a few days before the expected period sets in. This is, however, not a reliable indication as the timing of the two may actually correspond in the majority of women.

Certain symptoms that accompany implantation bleeding can also be helpful for distinguishing it. IVF clinics in Delhi expect women to be aware of them so that they can recognize positive results as early as possible. These include mild cramping, headaches, mood swings, nausea, and breast tenderness. These are the first identifiable signs of pregnancy and ensure that the bleeding is the result of implantation rather than a regular menstrual period. The best way to make out the cause of the bleeding is to take a pregnancy test. Gynecologists suggest a two-week wait before taking the test for natural or assisted pregnancy with IVF treatment in Delhi. It is only after a positive pregnancy test that the woman can actually be sure that she bled due to the embryo implantation rather than her period.

When to be concerned?

Short-term, light bleeding should not be alarming when a woman is expecting pregnancy. It could happen due to embryo implantation, cervical irritation, vaginal infection, or after intercourse. But there are some conditions that IVF clinics in Delhi lay down to be taken seriously. Extended and/or heavy bleeding should be paid attention to as it could happen due to serious complications such as ectopic pregnancy, molar pregnancy, and miscarriage. These complications are indicated by warning symptoms such as severe pain and abdominal cramping, nausea, and dizziness.

Implantation bleeding is not conclusive evidence of pregnancy yet it is a positive sign. Women taking IVF treatment in Delhi need to be extra vigilant and consult their specialist in the first instance. The specialist would decide the best time to take the pregnancy test as well as rule out the chances of any complications.

Gaudium IVF is the top infertility center in India where patients are offered extensive reproductive techniques as well as gynecological solutions for diverse infertility and reproductive issues. Visit here for a free second opinion from Dr. Manika Khanna, the leading infertility specialist in Delhi.