Talk it out & get it cured: Break the silence on Male Infertility 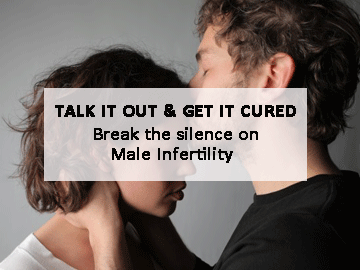 Talk it out & get it cured: Break the silence on Male Infertility

Infertility is not just limited to women, it affects both the genders equally. When a couple fails to conceive even after trying for a long time, its necessary that both the partners should be tested and not just the women. Studies have revealed that 1/3rd of the infertility cases are due to women, 1/3 rd due to men and rest 1/3rd due to a combination of both.

When Mr. and Mrs. Oberoi (name changed) came to Gaudium IVF for consultation of their infertility treatment in Delhi, they were very tensed and under a lot of pressure. Our counsellor made sure to talk to them through and get them out of all of their fears and concerns. They were unsure that Mr. Oberoi being 43 years of age and Mrs. Oberoi being 35, would it be even possible for them to become pregnant now.

After being examined thoroughly by our best doctors in India, it was revealed that Mr. Oberoi was suffering from Azoospermia.

Azoospermia is a male factor infertility condition in which the semen is completely devoid of sperms. Men suffering from Azoospermia have normal libido and sexual functionality so it can be diagnosed only by a semen sample examination under microscope.

The technique, TESA was done on Mr. Oberoi which suited his condition the best and mature sperms were retrieved which resulted in a successful conception in Mrs. Oberoi when it was combined with the technique ICSI and she conceived with a singleton pregnancy.

TESA (Testicular Sperm Aspiration) is a technique in which a fine needle is inserted in the testicle for sperm extraction. Its a day procedure and is performed under short general anaesthesia.

ICSI (Intracytoplasmic Sperm Injection) is an artificial reproduction technique, in which the sperms are eggs are extracted from the male and female body respectively. The sperm is then carefully inserted into the egg using a fine needle. The fertilised egg is then observed for development and then is transferred to the uterus for implantation and growth.

Gaudium IVF, the best IVF clinic in India has been successfully giving hopes to hopeless couples. The couples who are longing to be parents, should not hesitate to consult an IVF specialist at the earliest. Since nothing is impossible, with correct diagnosis and treatment, it is possible even for an infertile person to cherish parenthood.