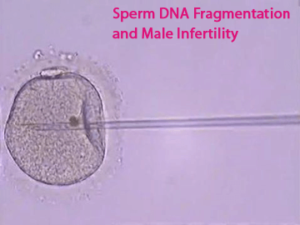 Sperm is the main parameter that determines male fertility. Sperm count, motility and morphology are the factors taken into consideration while evaluating sperm health. One of the lesser-known factors is sperm DNA, though this does not make it less significant. A couple struggling with male factor infertility is first evaluated for the regular sperm parameters. If these turn out to be normal, the sperm has to be screened for sperm DNA fragmentation to verify the exact cause of infertility.

As the name suggests, sperm DNA fragmentation refers to the physical breaking of the DNA strands found in the sperm. DNA is the hereditary material that stores the genetic code which plays a vital role in creating a new organism. Sperm DNA fragmentation can result in infertility or cause pregnancy complications due to the inability of the sperm to communicate properly with the egg. Complicated as it may sound the problem is still treatable if handled properly. It is important to understand all about sperm DNA fragmentation before moving over to its solution.

The genetic integrity of sperms is a key parameter to measure male fertility. High level of DNA fragmentation is thus, associated with male infertility. Men suffering from DNA sperm fragmentation are still capable of having healthy babies though their chances are considerably reduced. The reason is that embryos, formed by fertilization of eggs with such sperms, may not be viable enough. Complications such as blastocyst growth arrest, miscarriage, and genetic abnormalities in the offspring may surface in such pregnancies.

Sperm DNA fragmentation may also affect the outcome of assisted reproductive techniques such as IVF and ICSI. Multiple failed cycles may be attributed to the poor DNA quality of the sperm. Animal studies have shown that the rate of IVF implantation is compromised when the procedure is carried out with sperms with high DNA fragmentation. In the case of ICSI, there is a high risk of birth defects if the single chosen sperm has fragmented DNA. It is important to note that the sperm to be used for the procedure cannot be tested for DNA fragmentation as the test renders it unfit for fertilization. The suitability of patients with high sperm DNA fragmentation for ICSI is therefore a matter of concern.

A variety of factors can lead to DNA damage in the sperm and most of them are similar to the ones which hamper the sperm count and quality. Primarily, it is the oxidative stress (damage caused by free radicals) that damages the genetic material of the sperm. Here are some leading causes of sperm DNA fragmentation:

An advanced fragmentation test involves the analysis of semen samples to find out the percentage of sperms with fragmented DNA. This figure is defined as sperm DNA fragmentation index (DFI). A value below 15% implies a very good report, DFI between 16-29% is interpreted as fairly good, and a value exceeding 30% indicates a poor prognosis. In the last instance, there are slim chances of a healthy natural or assisted pregnancy.

DFI test is recommended for couples with unexplained infertility. Men who get favorable diagnostic results for sperm count, motility, and morphology may still be unable to conceive because of DNA damage of the sperm. This is when DFI test helps to identify the exact problem so that it can be resolved. The test is an indication of DNA fragmentation of the sperms, but unfortunately sperms once tested are destroyed and cannot be used for IVF/ICSI. Therefore, it is possible to find the percentage fragmentation for a patient, yet the fragmentation status of sperms used for treatment cannot be evaluated.

The treatment of sperm DNA fragmentation is dependent upon the underlying cause. Positive lifestyle changes can be the best way to deal with sperm damage caused by oxidative stress. These changes include eating an antioxidant-rich diet, avoiding smoking, and reducing exposure to environmental toxins and pollutants. Taking antioxidant supplements may also boost sperm health. Antibiotic treatment is used to resolve DNA fragmentation induced by infectious conditions of the urogenital organs. Those suffering from varicocele may benefit from repair surgery to restore sperm integrity.

Gaudium IVF is a renowned IVF clinic in Delhi that provides advanced and comprehensive treatment for all kinds of reproductive issues in men as well as women. Visit here for free second opinion from the award-winning IVF Doctor in Delhi, Dr Manika Khanna.