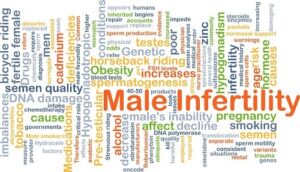 In the last few decades, male infertility in India has been on a steady rise. At the international conference on Challenges in Infertility Management (CIIM) in 2014, experts observed that male infertility now contributes to 6 in 10 of all infertility cases in the country. In most cases, low sperm count is the underlying cause.

Being diagnosed with infertility can be particularly hard for a man to cope with. The ability to father a child is still believed to be a man’s greatest virtue, and failure to do so can leave him feeling heartbroken, even depressed.

Unlike impotence, male infertility may present no physical symptoms, and therefore can go undiagnosed for a long time.

Causes of Male InfertilitySperm related problems are identified as the main cause of male infertility worldwide, and may be classified as follows:

These anomalies are detected through a detailed semen analysis, which is the first step in the treatment of male infertility. Semen analysis is preceded by a thorough physical examination of the male partner and complete medical history of both partners.

Based on the findings of the semen analysis, further investigation is undertaken to determine the root cause of the problem.

Factors which may inhibit sperm production and healthy functioning of the male reproductive system include:

Some studies link poor sperm production to non-medical factors such as poor lifestyle, unhealthy diet, increased consumption of processed foods, and the burgeoning trend of late marriage. For example, obesity is known to alter hormonal levels, which in turn affects sperm production.

Social stigma attached to male infertility discourages men from confronting the problem and seeking treatment.Most people believe that infertility clinic treat only female infertility.Impotence is often mistaken for infertility, leading men to resort to alternative treatments such as herbal products to improve sexual performance.Most couples delay treatment assuming the problem would resolve itself over time, which only worsens the situation.

In such cases, both partners undergo simultaneous procedures where high quality sperm are selected, prepared and combined with the female egg for fertilization. Fertilization may occur in a lab dish (IVF/ICSI) or in the womb (IUI).

IUI is a simple and cost-effective treatment beneficial for men with mild male factor infertility. In IUI, the semen obtained from the male is ‘washed’ to remove seminal fluid and any dead sperm. The healthy sperm thus obtained are placed into the woman’s uterus using a thin tube called a catheter. The procedure is timed to coincide with the woman’s ovulation.

For IUI to be successful, it is first ensured that the woman’s fallopian tubes are free of blockage.

In case of nil sperm, TESA-ICSI is known to be the one of the most effective treatments in helping couples conceive. As no sperm is present in the ejaculated semen, a small needle is used to collect a small piece of tissue from the testes.

ICSI is particularly beneficial for men with low sperm count as injecting high quality sperm directly into the egg maximizes the chances of successful fertilization. Learn more about ICSI

A noteworthy example is of a 31-year-old Gaudium patient who reported to us with nil sperm in the semen sample. The couple had been married for more than nine years and were trying to have a baby for the past five years.Gaudium fertility specialists counselled the couple about TESA-ICSI. The wife underwent IVF and on the day of the egg-retrieval, TESA was done for the husband. After successful fertilization in the lab, embryo transfer was performed through ICSI. The patient conceived and delivered a healthy baby in the very first attempt.

This is a simple technique often combined with ICSI. PESA is performed for men who have a blockage in the vas deferens (the tube that transports sperm from the testicle to the urethra).

The procedure of sperm aspiration is similar to that of TESA; the only difference is that the seminal fluid is collected from the vas deferens instead of the testes. This is followed by ICSI procedure as explained above.

Sperm production is affected by the levels of the hormones testosterone and estrogenin the body. In such cases where hormonal imbalance is detected, medication may be prescribed to restore normal hormone levels.

Some men require surgery to remove a blockage that may be affecting production or release of the sperm. Common surgeries for this purpose include varicocelectomy, epididymovasostomy and vasovasostomy (vasectomy reversal).

In a rare case when male infertility is found to be incurable, couples may choose to use donor sperm to achieve pregnancy. As the sperm is in frozen state, it is first thawed and then implanted into the uterus using IUI.

Today several treatment alternatives are available for men diagnosed with male infertility. Gaudium infertility specialists have successfully treated mild-to-severe male factor infertility for thousands of couples. Since 2009, Gaudium Infertility Clinic has assisted more than 6,000 couples have a child of their own.