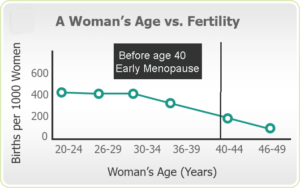 A woman is born with millions of eggs, the number as well as quality of which dwindles with age. Technically, menopause is reached when a woman’s ovarian reserve is depleted and her menstrual cycle comes to an end. To be more specific, a woman is said to have had her menopause when she has no menstrual period for a period of twelve consecutive months. The age for menopause is subjective; while it happens in late forties or early fifties for many, some women may have it earlier or later.

Menopause is a natural process that marks the end of female fertility. Therefore, a woman needs to be aware of her biological clock and plan motherhood accordingly. Early menopause is definitely a concern for someone who has planned to get pregnant at an advanced age; because there is a possibility that she may never have a baby. Female infertility is one serious implication of early menopause which every woman should be conscious about.

When a woman has menopause, she stops having her periods, which means that logically she cannot become pregnant. At the same time, it is important to understand that this does not happen overnight. Medically, perimenopause is the term used to define the time between the onset of symptoms of menopause for a woman, up to her actual last menstrual period. The time may extend up to six years or even more. Perimenopause involves gradual decline in a woman’s reproductive capacity, though she might still conceive. Remote as the chance may be, an unplanned pregnancy is something that many women may come across.

As a woman enters her early forties, she may start perimenopausal symptoms such as hot flashes, vaginal dryness, lack of libido, moodiness, irritability, night sweats, and irregular of periods (both in terms of timing and flow). This happens because her ovaries are no longer able to synthesize the essential hormones namely, progesterone, estrogen and testosterone, in a proper manner. If the levels of these hormones decline (suddenly rather than gradually) at a young age, early menopause sets in, and planning a pregnancy becomes a challenge. Additionally, the blood supply to the uterus is compromised, which can result in implantation failure for the embryo.

While female infertility can be an issue for some, there are others who may have to cope with an unplanned pregnancy, which is usually complication-ridden due to advanced maternal age. This may happen because of the irregularity of the menstrual cycle, which can sometimes mislead a woman and she may reach a few months into the pregnancy even without being aware. Until and unless a woman officially has her last period, she is still capable of reproducing, as it happens in freak cases when women in their fifties become pregnant.

Dealing with Infertility due to Early Menopause

Maternal age is the most vital parameter of fertility. Hormonal imbalance and declining ovarian reserve are the main factors that hamper fertility as a woman grows older. Women who plan a family in their forties may be taken by surprise if they have early menopause. In such cases, there is a need to look for options, something that has to be done sooner rather than later. For this reason, it is essential that she understands her biological rhythm and gets help early during perimenopause, the transitional phase that leads to menopause.

A woman approaching her menopause but wanting to conceive is not utterly helpless, she does have options. The only thing to bear in mind is timing, as she has to get help before her period stops completely. An expert fertility specialist is someone who can come to her rescue and treat her before it is too late. Here are the options that can be effective for women who suspect early menopause:

In Vitro Fertilization: IVF is one of the most widely used assisted reproductive techniques. It involves stimulation of the ovaries to produce multiple eggs, followed by their retrieval, fertilization with male sperm in a lab dish, and finally, transfer of the embryo so formed in the woman’s uterus for implantation.  A woman undergoing perimenopause can rely upon IVF treatment for maximizing the chances of conception as it offers a considerable success rate, of 25% for women under forty. However, the procedure may require to be done in conjugation with egg donation if the woman’s eggs have lost their viability due to age-related genetic issues.

Hormone Replacement Therapy: In some cases, the fertility specialist may not directly try an aggressive approach such as IVF; rather they may consider the simpler and cost-effective option of hormone replacement therapy. Follicle Stimulation Hormone (FSH) may be given as injections to replenish the declining ovarian reserves of perimenopausal women. The hormone replacement stimulates ovulation and improves the chances of conception, naturally or assisted with IUI.

Women nearing menopause may be baffled and scared at the prospect of losing their fertility, particularly if motherhood is yet to come. This means that they should be conscious enough to interpret the signals their body is giving so that the condition is diagnosed and treated at the earliest before it gets too late. Testing the egg quality and FSH levels as soon as early menopause is suspected is the best way to get a fair idea about the condition of the woman. Dealing with the emotional aspect of the problem is equally important because it may take her unawares. The support of the partner and family as well as expert counseling from a fertility specialist can be of great help, especially when some tough decisions like resorting to egg donation or adoption, have to be taken.

Gaudium IVF is the leading IVF clinic in India where patients can avail high-tech infertility treatment along with advanced gynecological care for issues like early menopause and complicated pregnancy. Contact here for a free opinion from Dr. Manika Khanna,  In the best IVF Centre in Delhi.