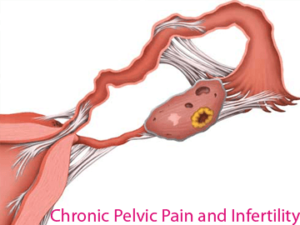 A woman suffering from infertility comes across diverse complications. Pelvic pain is one such symptom that can be seen as a cause as well as an effect of female infertility. When a patient experiences chronic pelvic pain for a prolonged period, she must see a doctor and have the condition evaluated. The causes could be varied, classified into gynecological, urinary, musculoskeletal, gastrointestinal, and psychological complications. Many of these complications are treatable if tackled in time.

The patient needs to be aware and vigilant, particularly if the reason behind chronic pelvic pain is related to a gynecological issue. The complication may turn worse if left untreated and lead to implications as serious as female infertility. On the other hand, timely diagnosis and treatment is a sure way to preserve a woman’s fertility.  Let us know about common gynecological issues which can lead to pain in the pelvic area.

One of the leading causes of chronic pelvic pain, Pelvic Inflammatory Disease is the infection of the reproductive organs such as the uterus, ovaries, and fallopian tubes. The disease is primarily caused by sexually transmitted infections such as gonorrhea and Chlamydia. It is often referred to as a silent epidemic because it can

be asymptomatic till things get worse. When the infection takes a severe form, it can cause severe pain, cramping, chills, fever, and uterine bleeding. It can lead to pelvic adhesions, which result in female infertility. If a woman does get pregnant, she is at high risk of ectopic pregnancy, during which the fetus develops in the fallopian tube rather than the uterus. Repeat occurrences of PID are extremely dangerous for women of childbearing age and ignoring the disease can hinder their fertility.

Endometriosis is a reproductive condition associated with the abnormal growth of the endometrial tissue outside the uterus, not within it. The tissue growth may extend to the ovaries, fallopian tubes, and other organs in the pelvic cavity. This is another reason why women come across chronic pelvic pain, though there may not be any symptoms at all. It may also cause menstrual pain and cramps and pain during sexual intercourse. A severe form of endometriosis may render a woman infertile. It can happen due to inflammation and scarring of the reproductive organs, which may hamper key reproductive functions such as fertilization and implantation. Endometriosis is diagnosed with a pelvic examination and an ultrasound scan. The scar tissue can be removed using laser treatment. Timely intervention and treatment can resolve the problem and help a woman conceive.

Another common problem that is manifested in the form of pelvic pain is Polycystic Ovarian Syndrome (PCOS), a condition related to hormonal dysfunction. In this condition, the ovaries produce multiple cysts rather than viable eggs. It is generally attributed to the imbalance of reproductive hormones and is characterized by symptoms such as irregular/absent periods, abnormal weight gain, excessive hair growth, and chronic pelvic pain. Also, PCOS is regarded as one of the most common causes of female infertility.

Pelvic adhesions, as the name suggests, are the presence of dense scar tissue in the pelvic area. It could happen due to pelvic infection, a previous pelvic surgery, a ruptured appendix, or an IUD. These adhesions can result in severe pain and also infertility issues. The condition is confirmed through laparoscopy and the adhesions are cleared with microlaser therapy.

Uterine fibroids are benign tumors that grow on the muscular walls of the uterus. The size of these fibroids may vary from that of a small pea to one that is large enough to occupy the entire pelvic region. They are associated with pelvic pain, backache, heavy menstrual bleeding, pain during intercourse, and bowel/bladder dysfunction. Fibroids may not only compromise a woman’s fertility but also her ability to carry a pregnancy full-term. They can impede the implantation of embryos and cause miscarriage if pregnancy does take place. Fibroids have to be removed using laparoscopy for restoring fertility.

Another widely prevalent cause of chronic pelvic pain is the presence of ovarian cysts. Most of these cysts are functional in nature, as they are formed due to hormonal changes during the ovulation cycle. Subsequently, they may disappear on their own. These can cause pain on either of the sides, depending upon the ovary in which they are formed. Though ovarian cysts can cause pain in the pelvic area, they do not pose threat to female fertility in most instances. They can, however, be resolved with medication and sometimes, surgery.

A condition similar to endometriosis, Adenomyosis is characterized by the growth of endometrial tissue outside the uterus, on its outer muscular walls. The tissue may grow to form tumor-like structures, often taken for fibroids. Symptoms like severe menstrual pain, cramping, and heavy bleeding are associated with the condition. On the contrary, the tissue grows over other pelvic organs such as ovaries, fallopian tubes, and bowel, in endometriosis. Another difference between the two is that adenomyosis is not as easily treatable as endometriosis. Hysterectomy is the recommended treatment for this condition and it results in infertility.

In addition to these reproductive issues, chronic pelvic pain may be attributed to numerous other factors too. These include inflammatory bowel disease, irritable bowel syndrome, intestinal cystitis, pelvic floor dysfunction, and some psychological issues, such as depression and mood swings. A woman should pay heed to chronic pelvic pain and seek help sooner than later so that she may safeguard her fertility.

At Gaudium IVF, the top IVF clinic in India, patients can get advanced treatment for female infertility, in addition to comprehensive gynecological care and support for common conditions such as chronic pelvic pain.