All that Infertility clinics in Delhi advise about Gestational Diabetes 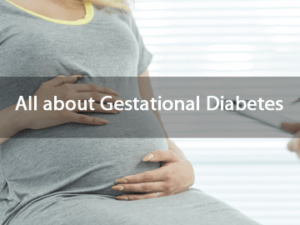 Diabetes is a common disease that affects millions of people worldwide. It can take the form of an acute pregnancy complication too, as some women experience it as gestational diabetes. Any complication gets bigger if the pregnancy is a precious one or has come after a prolonged battle with infertility. This is the reason why IVF centres in Delhi lay great stress on dealing with such complications like diabetes during pregnancy.

Statistics have shown that almost 9% of pregnant women face this complication and a majority of them are non-diabetics before pregnancy. It is important for expectant mothers to be well aware of this condition so that they can manage it with medical help. Let us know what the best IVF Specialist in Delhi have to say about the complication:

Like gestational hypertension, gestational diabetes to is induced by pregnancy. It is characterized by an unprecedented rise in blood sugar levels in a woman who otherwise has normal metrics. The exact cause of the condition has not been established yet, though it is attributed to placental hormones. These hormones support the development of the fetus but in some cases, they block the action of insulin in the body. This results in insulin resistance, a condition when the body is unable to produce and use all the insulin it requires. In the absence of sufficient insulin, glucose does not leave the bloodstream and builds up to reach high levels.

Here are some of the risk factors of the condition as told by infertility centers in Delhi:

Normally, gestational diabetes has no symptoms, which makes it a reason to worry. The woman may however come across some subtle warning signs which she should be watchful about. Here are some which infertility doctors in India caution about:

The first three symptoms are quite similar to pregnancy symptoms and this makes detection harder. An expectant mother needs to pay heed to these warning signs and take advanced tests at the slightest suspicion. An immediate consultation with Infertility clinics in Delhi is advised in such a situation.

Gestational diabetes is not as dangerous as gestational hypertension though it can have some far-reaching impact on the baby. The complication usually surfaces in late pregnancy, when the fetus is fully formed. For this reason, Infertility doctors in India rule out the possibility of birth defects due to diabetes. However, untreated diabetes can cause high blood glucose levels in the baby. The reason is that the extra glucose in the mother’s bloodstream reaches the baby through the placenta. The baby gets extra energy which gets stored as fat. This condition is known as macrosomia, which can result in difficult labor, preeclampsia or stillbirth.

Infertility clinics in Delhi warn about some health issues with the baby, such as breathing problems, jaundice and very low blood glucose at birth. Such babies are also at high risk of obesity and type2 diabetes as they grow up. For the woman, gestational diabetes generally resolves itself after the delivery. If it does persist, it can be managed with medication and lifestyle modifications.

Since the symptoms of the condition are very subtle, it is difficult to diagnose. It is usually detected in a glucose screening tests which are conducted at 24-28 weeks as this is the time when the condition is most likely to surface. The test requires a woman to have a high-sugar drink, following which blood sugar is tested after one hour. Further testing is needed if the preliminary test indicates high blood sugar, anything above 130 mg/dL. For women at high risk, the infertility doctors in India recommended these tests from time to time during the pregnancy.

Management of gestational diabetes usually encompasses lifestyle changes. The infertility centres in Delhi advise regular monitoring, with blood sugar tests four times a day. The gynecologist will also keep an eye on weight gain as it is related to several complications. Positive lifestyle changes such as a healthy diet and regular exercise are effective for resolving the problem to a considerable extent. Medication may have to be given in cases where lifestyle changes fail to manage the condition. Besides these management tips, women at high risk should focus on preventive measures. For instance, women of advanced maternal age, obesity or pre-existing diabetes should be watchful from the day 1 of conception. Constant monitoring and consultation with the doctor can make all the difference, both for the mother as well as the baby.

Gaudium IVF is one of the top fertility clinics which is acclaimed for bringing advanced treatment for female infertility and other gynecological issues. It guides and counsels patients regarding common pregnancy related complications such as gestational diabetes and gestational hypertension.